Headlights that is. I figured I needed to spark some conversation.

Good thing he is getting new ones.

The stock headlights on the C5's are terrible at best. I can leave the brights on and people don't flash me. I upgraded to the super bright Silvastars with no success as they previous owner seemed to have had the same idea as me. I am overdriving the lights at 110km/h so it's about time I changed to new ones....and that's with the brights on!

What do others think of the stock C5 lights?

I don't know how many people are against fixed lights on C5's but I thought I would give them a try. Not my car.

i tend to agree about the stock C5 lights... i'm just glad for long winter days in the summer.

you forgot to tell Riley that his camshaft is small too HAHAHAHA
Expand
'01 Z06 It only idles like this cause it needs a tune-up...

It's not the size of your cam but how you use it.
Expand
2000 Z51. Vararam, Borla Stingers, Blue MAF

And just who told you that. Would that be the same rational for a big block vs a small block in, oh say, a chevelle?

Not the same rational at all, people can play with their bump sticks all day if they want but if you want some real balls, you've got to add cubes.
Expand
2000 Z51. Vararam, Borla Stingers, Blue MAF

Riley P said:
It's not the size of your cam but how you use it.
Click to expand...

I thinks its more the grind of the cam

I actually am very interested to see how the new lights look. Whanna do the swap at my place?

I'll be up for that! They should be ready for purchase in a week or two. Then shipping. Then paint. Then install!
Expand
2000 Z51. Vararam, Borla Stingers, Blue MAF

Word on the street is that the headlights should be available for purchase in a week! Rockin.
Expand
2000 Z51. Vararam, Borla Stingers, Blue MAF

Headlights are ordered! They should arrive in 4-6 weeks! Just in time for Spring.
Expand
2000 Z51. Vararam, Borla Stingers, Blue MAF

Well I guess this is a good time to tell you it will take at least that long to have the snowbank in front of your shed to melt. of course i could be persuaded to move the snowbank so it melts faster. Then I get to play with th Bobcat.

That's better than my plan! I was thinking we could just keep ramming the pile of snow with the go carts until we got through!
Expand
2000 Z51. Vararam, Borla Stingers, Blue MAF

So, the car is out and on the prowl. And I just found out the headlights have shipped! I imagine they should be here in a week or two. I can't wait! I'll post up when I get them!
Expand
2000 Z51. Vararam, Borla Stingers, Blue MAF

Well, I have the new headlights in and they are awe-some! I can finally see driving down the road. However, they were not quite adjusted right the first time and I was blinding people. Whoops! The second adjustment left them too low and I figured I needed another 100 feet on low beams when on the highway. I adjusted them a third time with the help of SilverVette and I'll have to test them again when it gets dark out. I'll keep you peeps posted.

Here is a picture with the surrounds not completely adjusted. I am working on a fix (you don't want to know the red neck fix I used to see what they would look like in their final position. I'll get some better pics on Thursday and hopefully find a stock C5 to compare light output pics.

Lights mounted in the car: 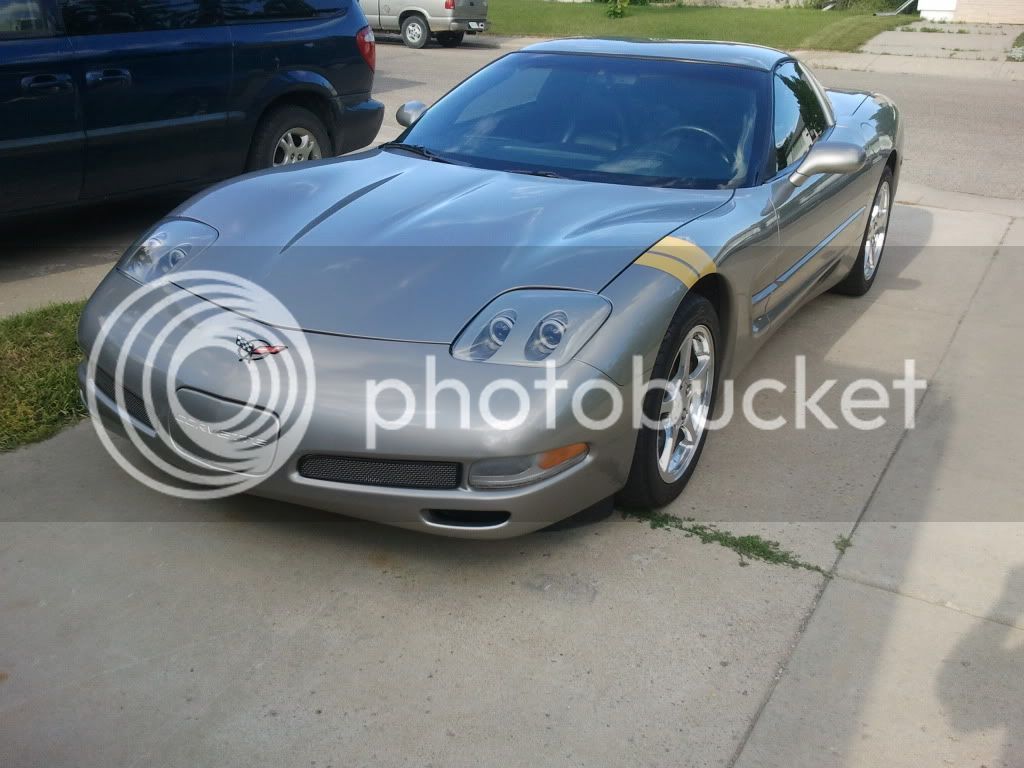 looks great Riley! I like the setup wayyyy better than the ones that stick up like bubbles!!
Expand
'01 Z06 It only idles like this cause it needs a tune-up...

Thanks guys! As for the pony's, boy, I am wracking my head to think of when that could be. It's at least a few raises away. I would LOVE some more ponies though.

As for the lights, I got to flash my brights at some drunks J-walking across the street to tell them to hurry up. It was actually quite hilarious as I had my windows down and could hear the typical guy grumbling from the fellas and I think one of the girls must have looked at the lights because she let out a Wooo! HA! Drunks.

More pics to come of some night shots. I hope the headlights are set to the right height so I can leave them, and use them. Oh! Plus I still have to hook up the terminators, although they won't look quite right as I have to paint the cut off shields on the lights and don't really feel like doing that right now.
Expand
2000 Z51. Vararam, Borla Stingers, Blue MAF

This may be opening a can of worms but I would also like to hear from the people who don't like them or about what headlights they like.
Expand
2000 Z51. Vararam, Borla Stingers, Blue MAF