You are using an out of date browser. It may not display this or other websites correctly.
You should upgrade or use an alternative browser.
F

Have an opportunity to aquire a 1976 stingray canary yellow original paint, show room condition.
with 5,7 litres, 350 rebuilt motor, car has 110 km....i've reaserched them and found ranging from 10K to 30 K....please explain to me why that would be, what to look for and is somewhere between 10k and 15 K a good buy ?

Very new at this and will appreciate all answers

Its a great possibility being that its all original but on the flip side, there could be a ton of issues with it... If you're that serious about the car, I would spend the cash and get a very thorough mechanical AND frame/body inspection done.
[mob][/mob]

I'll second the inspection and the inspection needs to be done by a knowledgeable guy on C3 Corvettes. Not to scare you but there can be some serious issues with a car of that vintage that are expensive to rectify. Then again, it could be a really sweet ride.

A few things to look at before getting an inspection would be to look at the frame in front of the rear wheels as this area is prone to rusting. Another area of concern for rust is the front cross member which could cause issues with the lower control arms. Look for alignment of the framework between the door and windshield pillar and check if the carpet in the foot wells is wet or shows sign of having been wet (discolouration).

In general, also feel around the lip of the inner fenders to see if they have been repaired or not. Look for different tints or colors of paint where body panels meet or adjustment, with the fenders/innerfenders/firewall to see if it has been in an accident and repainted. Check out the gaps in the body to see if they are even. If all that looks good, have an inspection done as suggested above and good luck with finding a Vette!
F

Thank you to all responders to date...Good advice...what about price?

Are there spl features on it that I should watch for that increases its value ?

Another important item to consider is what you plan on using the car for.

Is it going to be a cruise night car, a weekend get-away car, how many miles do you estimate on racking up each year ?

A C3 is a very beautiful car but most owners of them don't travel that far from home.
The 70's 350 carbourated V8 is a gas pig

Check out some of the other Corvette web sites to find out the pros and cons of this vintage of Vette.

Do lots of research before you pull the trigger.

A general rule of thumb on an older car is "the less you pay the more you will need to spend".

Good luck in your hunt.

Hard to say what the price should be without knowing the car.

You did not specify if you found that 1976 Corvettes range from 10K-30K or if you were just looking at C3's in general. Earlier C3's are very collectible with the different engine options and so forth. The mid 70's are less desirable because that's when emissions and other government regulations really choked the cars performance.

What i think Riley is really saying is... the '76 is nothing special to collectors and it isn't that fast...

If you're interested in a vette, the C4 or C5 present great values and while the C5 is much more reliable that the C4, BOTH are far more so than the C3's (gotta love the C3's though!!!)

I agree. I don't want it to sound like a '76 is not desirable or would not be fun to own, just watch what they are asking and compare it to other years of the same generation if you are looking for a C3. 68-73's are the most desirable and would therefore have the highest asking prices. Unfortunately and fortunately, 74-76 would probably have the lowest desirability (Someone correct me if I am wrong). The fortunate thing of the low desirability is that you can get a car that is in near mint shape for a lot less money than other cars of the same generation. I would hope to not pay over $15,000 for a showroom condition '76 Vette unless it is somewhat rare and has a 4-speed. For an auto, I would probably expect to be in the $13,000 range. Once again, someone please correct me if I am way out to lunch.

I need you C3 guys to step in here because I don't really like putting my foot in my mouth about another generation of Corvette...although, I am getting used to the taste.

sounds about right.. provided it is ready to hit the road. If it needs any work at all, i would caution you!!

I agree with much said here, however; if I am not too late I would like to offer you my 2 cents:

Riley is right, a 1969 to 1973 Vettes are the most desirable C3 Vettes because of their chrome bumpers. Vettes from 1974 to 1982 are not as much because the HP went down due to government regulations. HOWEVER; a good 1976 is a collectible in its own right, if the vehicle is mint and all original it will be very valuable, maybe not fetching crazy prices right now, but imagine 20 years down the road. Right now the price difference is due to the HP originally from the factory, but funny enough, the most expensive C3 is a 1970 ZR1 with a small block, so it is not the power that makes them valuable, but originality, and how rare the car is or will become. A perfectly original 76 will be pretty valuable in the future, as it only becomes more rare.

That being said, a 1976 Vette that is in mint shape and very original is worth $20K.... a so so Vette not numbers matching, bad paint, etc it is not worth more than $8K. Paint alone would be around $7K for a quality job so you are better off spending a bit more for a perfectly sound all around Vette. History shows that every year is special on its own merit... would you say yuck to a 1964 Stingray? no way! but 20 years ago you might have because you'd prefered the 1963 split window...and dont buy a SO-SO Vette unless you are looking for a big project!!!

freadom said:
Thank you to all responders to date...Good advice...what about price?

Are there spl features on it that I should watch for that increases its value ?
Click to expand...

All of these guys have given you good advice but I would like to offer a point I didnt see in the other posts. PEOPLE ARE CRAZY! The reason there is such a big price difference all over in these cars is bacause no one really knows what they are worth!
They are a specalty car, and as such they have a value of what ever someone with a cheque book is willing to pay. Corvette owners very often significantly over value there cars, I have seen it a hundred times. It is not just limited to C3's but all other modles too, you find a C5 in Saskatoon anywhere from $20,000 ---$40,000 and there will not be any real difference in the vehicles.

I really believe the owners are just not being realistic, just because that is what peole are asking doesnt mean thats what they are worth, we have had a guy in town here trying to sell one of the worst C4's I have ever seen for about 2 years now and he wants $20,000 for it because he is crazy!

I just had my 75 Stingray apraised on the weekend. It is pretty rough bodywise (chips, dings, cracks) and my front passenger fender between the door and fender is rusting and bowing as Riley said to look for. It was apraised at $6900.00 Hope this helps in coming up with a price:seeya:
G

The Difference with yours is that you'll basically have a brand new car when you're done, with the way you're doing it. To me, that boosts the value up considerably.

I have a 73. I paid 6500 and put 2200 into it imediatly to make sure it was safe to drive. The body is really rough, but the frame is solid. I think I got a great deal. You'll want to look behind the kick panels for rust if the seller will let you. Also like Riley pointed out the #3 body mount right in front of the rear wheels (covered by a plastic rectangle). If those two spots are rust free chances are the birdcage is still solid (although it can still be bad). I have a table of values with additions and omitions for different options for C3's at home. I will post it when I get done work. If I remember correctly it is from 2 years ago so it won't be 100% accurate but it will still be close. Many times selling prices boil down to how bad you want that specific car. I have seen cars sell for way more than they are worth because they were exactly (all the options) what the buyer wanted. And condition obviously makes a huge difference. If the car is original (engine and all) you will pay more. If you are not planning on leaving it original then look for one that is already not original and you can probably get a better deal. Some people are anal about original and numbers matching (even though there are different opinions on what numbers matching means so watch out for that too). It all depends what YOU want.

Give you more info when I get home

From March 2008. These were auction based values. 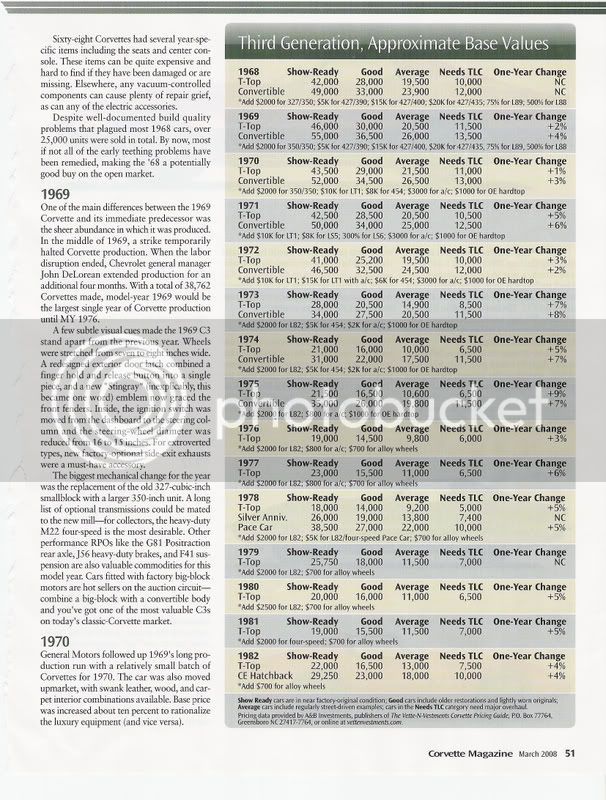 Are those American prices or Canadian? I think I could guess, but I just want to make sure.