Got to drive a Supercar today! Read on for my notes.

You are using an out of date browser. It may not display this or other websites correctly.
You should upgrade or use an alternative browser.
S

I was heads down and working when my boss stopped by my desk. We had chatted several times since the early morning about several things after our business dinner last night with the company. I should mention that he had shown up in a MB McLaren SLR 722. Anyone familiar with supercars would know this beast but in case you are like my Bonnie, a photo is below.

Out of the blue he says to me "Why don't you take it out for a spin and give me your impressions". I think my jaw dropped in disbelief. I figured that he would at least come along for the ride to make sure I could handle it. But no - he just tossed me the key and said "have some fun but be careful, it is extremely powerful". He was not joking. 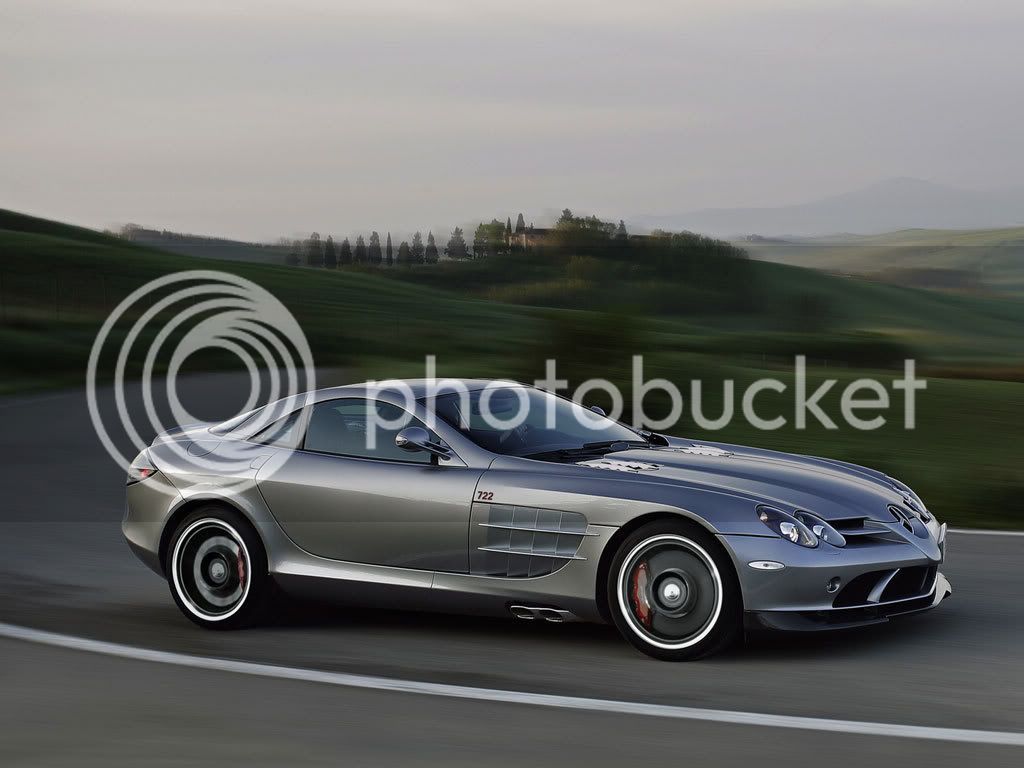 First thoughts:
This car is l-o-n-g,lean and mean looking albeit dressed up to the nines! It looks fast even when it's parked!

Getting in is interesting with the gullwing doors. Compared to a C4, you have more space to cross before you can get your butt into the contour fitting race-seats. Takes some getting used to I would imagine. This is not really designed for hot ladies in micro skirts (or maybe it is).

Next thoughts:
As a C6 owner you are used to lots of things like where the start button is. Not so obvious in a McLaren. The fob goes onto the dash and you spend the next 20 seconds looking for the start button. OMG! It is tucked under a little flip door on the shift stick - F-18 missile launcher style. This not only describes the car to a detail but also preps you for the driving experience ahead.

When the motor fires up I was reminded of the words uttered by Russel Crowe in Gladiator - "Unleash hell". With the headers coming out behind the front wheels as individual pipes, you are greeted to a symphony unmatched by any artist. I immediately shut off the radio to be consumed by this sound, all the while my nerves are on edge. This "thing" is worth 13 Corvettes or 3 times my house (at least).

After strapping myself in, I proceeded to inch my way out of the underground garage. The attendants were begging me to rev it up for them to enjoy it too. Honestly, I was too nervous. I just wanted to be careful taking it out as it is quite a long beast.

Driving notes:
This is not a street car. It may have all the trappings and refinement of a luxury sports exoticar but it is race-bred through and through. The handling is surgically precise and I haven't even got to the power yet. Being carbon-fiber built means that there is literally no discernible body flex. It is stiff! Cornering like it is on rails, the handling belies the weight it carries.

It is equipped with carbon-ceramic brakes like the ZR-1. I confess to not be a huge fan of these as I discovered that my head almost went through the windshield several times when braking (kidding). The reality about these bakes are that unless you intend to track your car and are concerned about brake fade, this is one very expensive overkill.

Now for the power. GOBS, massive gobs of torque and power. It is scary fast - so much so that one can so easily lose. Driving this exoticar is not only an art but requires skills which I have not perfected yet. You must be vigilant of so many things as it is reactive to EVERYTHING from throttle to road conditions. Without casting a glance, I went from 50km to 150km on the DVP (Hwy 404) in what seemed like a millisecond. With hands in the 9 - 3 position at all times, I could make every turn without ever changing positions on the wheel.

Compared to the Vette
To be honest it is hard to compare the two as their DNA's are almost a universe apart. I would be scared to own such a car for so many reasons (price being key), but mostly the fact that it is not that much fun. The Vette makes you feel alive. This made me scared as people follow you to get a closer look, sometimes too close. The power curve is so extreme and at the low end enough to make it both thrilling and almost unpredictable. The Vette on the other hand is more predictable (even with mods).

Now here is the key difference. I have met the most amazing friends through Vette ownership/passion that I would doubt having the same experiences at such stratospheric levels that this car fetches both in price and the crowd it may hang in.

Great story man!!!! that sounded like a once in a life time experience!
I am still getting that feeling just driving a bare-bones C6, but it sound like
you kick-it-up-a-knoch!

thanks for the impressions!!! once in a lifetime experience...

Great Write up Pierre. Almost an Icedcap style commentary.
Who are you working for, some rich oil Dude?

That is an incredible car

Great story! That would have been insane!

Well written! Thanks for sharing your experience and impressions. We can all scratch that Benz off our "must have" list now. Anyway, it looks like it would be a difficult car to properly equip with a set of roof-racks and a trailer hitch!

Talk to the guy that made a vette into a pick up truck... he could do it!!!
Show hidden low quality content

My ZR1 on the Stratus lift

It’s here!…. And a question

My first Corvette sighting (s) of the season.